I sat down to this movie in great spirits last night, complete with a meat pie from this place down the street and some cold ale from my fridge…. was my plan until i picked up a closing shift at work and found out i still had a cold. So instead of a warm meat pie to get me in the spirit of things I had some leftovers and instead of ale I drank some Theraflu type thing. I guess I still did get in the spirit of things just instead of Robin Hood mindset I was in the serfs he was saving. 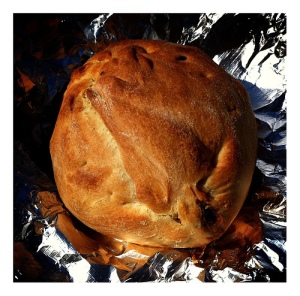 On to The Adventures of Robin Hood!

The 1938 version is no different than any other Robin Hood movie you’ve seen. The plot goes as this: Sir Robin of Locksley, defender of downtrodden Saxons, runs afoul of Norman authority and is forced to turn outlaw. With his band of Merry Men, he robs from the rich, gives to the poor and still has time to woo the lovely Maid Marian, and foil the cruel Sir Guy of Gisbourne, and keep the nefarious Prince John off the throne. 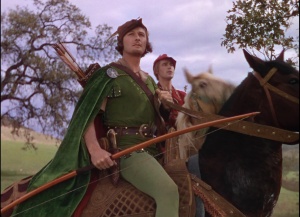 Where do I begin? I’ve already seen this movie and although it’s been at least 4 or 5 years I still had the same reaction. First, the undeniable attraction to Errol Flynn, man that guy looks good in tights. Unfortunately, let’s just say Robin hood and little john were more than just compadres… but a girl can dream. Secondly, made in 1938, the technicolor was amazingly bright in this movie. The outfits put a leprechaun to shame. I thought the acting was just right in this movie. There have been so many takes on Robin Hood and especially recently they all seem very dramatic, dark, a very intense take no prisoners robin hood. As the movies are based on light hearted book as far as i know, this was just what  thought it should be. 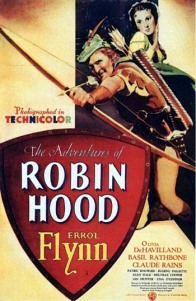 One comment on “2. The Best Loved Bandit Of All Time!”